Please note: this document is available for information only.

The Royal College of Radiologists (RCR) published The Role and Development of Brachytherapy Services in the United Kingdom in 2007, based on the original publication of 2001, which have both been withdrawn. Both documents were based on surveys of brachytherapy practice in the UK which showed that the use of brachytherapy varied widely, although the latter (2005) survey showed greater consistency in practice than the original (1998). The document recommended minimum levels of resources and patient throughput per centre to maintain a safe and effective service with adequate opportunity for training in brachytherapy of clinicians, physicists and radiographers. It also recognised that the role of brachytherapy may change, with new clinical indications, techniques and equipment.

Since 2007 there have been major changes in brachytherapy, with much more widespread use of low dose rate (LDR) interstitial prostate brachytherapy and declining use of brachytherapy in areas such as head and neck cancer. Some applications that were expected to become more common, such as intravascular brachytherapy, have actually become less frequently used with the development of chemotherapy-impregnated intravascular stents. Expected developments in intra-luminal brachytherapy have not progressed as endoscopic laser resection has been developed.

High activity source afterloading systems, such as high dose rate (HDR) and pulsed dose rate (PDR), have largely replaced LDR equipment. This is a critical time for many centres, where there is a need to review resources for brachytherapy. Account will have to be taken of a centre’s case mix, the need for brachytherapy and the capital and revenue costs associated with it. In order that the wellbeing of the patient remains the focus of these decisions, the RCR has published its updated guidance, The role and development of afterloading brachytherapy services in the United Kingdom, setting minimum standards for a brachytherapy service.

The role and development of afterloading brachytherapy services in the United KingdomPDF - 544.2 KB 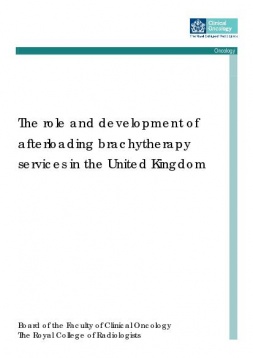