The radiological investigation of suspected physical abuse in children

Please note that a revised edition of this guidance was published in December 2018 following a consultation of some of the recommendations based on new evidence brought to the attention of the working party.

This guidance has been produced jointly by The Royal College of Radiologists and the Society and College of Radiographers, and endorsed by the Royal College of Paediatrics and Child Health. It is designed to assist referring clinicians, paediatricians, radiologists, radiographers and nuclear medicine technologists who are requesting, performing or reporting on imaging in cases of suspected physical abuse in children, by taking them through the process in a logical and structured manner, setting out clear recommendations for each stage and providing exemplar forms and documentation.

In producing this guidance, the key questions we have addressed are:

At all times, the comfort and safety of the child is of the utmost importance.

In developing this guidance, we have sought to incorporate evidence-based changes for the type of imaging conducted to detect occult injuries, while minimising radiation exposure and patient distress. Evidence has been considered, reviewed and discussed extensively by the working party and other experts and informal consensus reached, based on the professional judgements of those involved. A full report of the methodology involved in the production of this guidance is available.

To facilitate the implementation of the recommendations included in this guidance, a range of implementation tools have been included as appendices. These are available to download and adapt for local use.

An audit template will be published in the AuditLive later in September and online eLearning resouces are currently under development. Links will be made available when these resources are published.

This new guidance supersedes the 2008 document by The Royal College of Radiologists (RCR) and Royal College of Paediatrics and Child Health (RCPCH) Standards for radiological investigations of suspected non-accidental injury which has now been withdrawn.

The RCR consulted on post-publication revisions being proposed to recommendations 4, 15, 18, and 44 in this publication in light of new evidence brought to the attention of the working party. The revisions took place following member and public consultation in 2018. Appendix D ‘Exemplar skeletal survey competence form’, of the original document was removed as a result of the revisions to recommendation 15.

The following revisions have been made to the document since it was first published in September 2017.

The radiological investigation of suspected physical abuse in childrenPDF - 644.76 KB 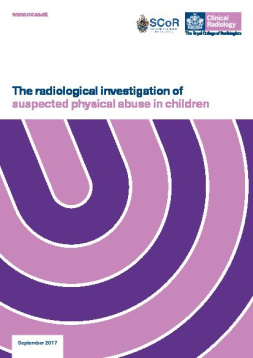 eLearning: Imaging in cases of suspected physical abuse in children