Summary
Background
Patients treated for breast cancer may suffer a range of upper limb problems, from mild oedema and inner arm sensation changes related to surgery, to the rare but severely disabling brachial plexus neuropathy associated with radiation damage brought to public attention by a group of patients, Radiotherapy Action Group Exposure (RAGE), who claim to have suffered such damage.

Axillary tunnel damage
The term axillary tunnel damage (as used in the terms of reference) is not commonly used in the literature. The Maher Committee interpreted it as describing the spectrum of problems associated with damage to tissues adjacent to the clavicle and under the armpit due to treatment with ionising radiation. The most serious complication is generally acknowledged to be damage to the nerve cords, i.e. radiation induced brachial plexopathy (RIBP). Review of the literature revealed no completely unambiguous guidelines as to diagnosis or management of RIBP; most studies were based on small series of selected cases considered retrospectively rather than large prospective randomised trials. There is thus no solid research base. The committee has been guided by the priorities identified by RAGE.

Key elements of management include:

Access to services
The designated oncologist in each cancer centre will take referrals where no oncologist has been consulted so far (or relationships have broken down). Where there are problems gaining access to a clinical oncologist, GPs and district nurses are extremely important points of contact, but may not be familiar with RIBP. A breast care nurse may be better able to facilitate the referral. Patients who do not currently have a breast care nurse can contact the RCR's Clinical Audit Unit for the name and address of a regional representative of the British Cancer Nurses Network (BCNN), who can put patients in contact with a local nurse, or of the British Lymphology Interest Group (BLIG), who may be able to offer advice as to where to seek help concerning lymphoedema. 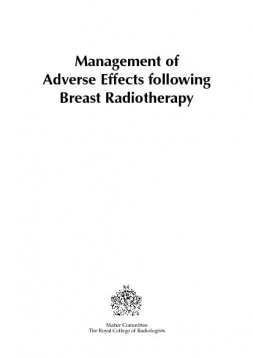