A Rapid Response Report was issued by the National Patient Safety Agency in February 2009, alerting healthcare providers to the potential risk of harm associated with the use of oral bowel cleansing preparations.

As a result, draft patient safety guidelines were prepared to help in the first of the recommendations, relating to clinical assessment, produced by the Association for Coloproctology of Great Britain and Ireland for The Royal College of Surgeons, the British Society of Gasteroenterology, the British Society of Gastrointestinal and Abdominal Radiology, The Renal Association and The Royal College of Radiologists.

The final version of the guidelines has now been published in Gut.

Consensus guidelines for the safe prescription and administration of oral bowel-cleansing agentsPDF - 109.85 KB 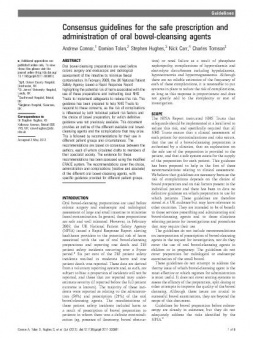