The RCR has welcomed calls for better diagnosis and management of patients with potentially deadly bowel obstructions, while cautioning that the UK’s shortage of scanners and radiologists is hampering improvements.

A report from the National Confidential Enquiry into Patient Outcome and Death (NCEPOD), released today, compiled evidence from UK-wide case reviews and clinician surveys to make a series of recommendations for improving the care of adults with acute bowel obstruction.

It stresses the need for dedicated management pathways and better access to vital CT scans and surgical treatments.

The report estimates pathway improvements could impact nearly 800,000 patients who present to Accident and Emergency (A&E) departments each year with abdominal symptoms that could be life-threatening bowel obstructions.

Hospital imaging is crucial in identifying the need for emergency surgery, however, delays and issues around imaging is a running theme of the report.

The collated case reviews and surveys analysed by NCEPOD revealed that:

“The RCR strongly welcomes NCEPOD’s review, which plainly demonstrates that there is much more to be done to improve the care of patients with emergency bowel obstructions, and that rapid access to imaging scanners and radiology expertise is crucial.

“The report authors recommend that all patients with suspected bowel obstruction are promptly sent for a CT scan with contrast, however, a significant number of patients are missing out on those scans, and restricted access to scanning equipment can delay diagnosis and treatment for those that do get them.

“To implement NCEPOD’s recommendations and ensure we can quickly detect life-threatening sepsis, intestinal tears and blood loss in these emergency patients, the NHS needs more diagnostic capacity. We need more scanners and more hospital-based radiologists to interpret complex abdominal scans2 but the UK is currently struggling with one of the lowest allocations of CT scanners in the developed world3 and a diagnostic radiologist workforce that is 30 per cent understaffed4.” 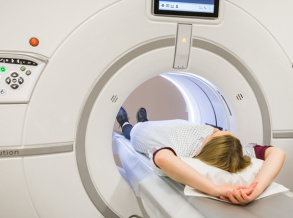 Patient in a CT scanner