The Royal College of Radiologists (RCR) has serious concerns around the findings of the Health Education England (HEE)-commissioned report into sonographer regulation, published today.

In its report to HEE, the Professional Standards Authority (PSA) concludes that statutory regulation of sonographers in England is currently not appropriate or proportionate, as the majority of practitioners are already regulated via their primary professional roles, and quality assurance in diagnostic and screening services is overseen by registration with the Care Quality Commission.

However, the PSA does envisage future regulation if there is an increase in the number of those entering sonography from new direct-entry training routes1.

“The RCR has grave concerns regarding the PSA’s findings.

“While there is medical oversight and guidance for sonographers working within the health service – whatever their background – there is no guaranteed accountability and competency framework for independent sonographers, who may or may not be registered with a professional regulator.

“In addition to ignoring the risks of unregulated sonographers, the decision to maintain the current regulatory process also disadvantages and restricts the scope of practice of those entering sonography through new routes such as undergraduate courses or apprenticeship training. Because these individuals will not be regulated by a professional body they will be unable to develop their skills and work as advanced practitioners, in accordance with NHS safeguards.

“Potential lack of trust in unregulated new graduates could then lead to the failure of the undergraduate sonography programme.

“If new training solutions do bring about the increase in sonographer numbers hoped for, it would make sense to have a regulatory system up and running, rather than dragging interested parties through another time-consuming consultation on the issue.

“The PSA’s assertion that risk can be managed by strengthening clinical governance in departments, or encouraging the albeit relatively low number of unregulated practitioners2 to join the Public Voluntary Register of Sonographers, is unlikely to be effective. This is especially so for services with constrained medical support and oversight.

“We wholeheartedly agree with the conclusion of the Independent Review Panel that advised the PSA, which stated that, ‘other forms of assurance were likely to be insufficient to manage the developing risk profile for sonographers, and that ultimately statutory regulation was required’.

“The RCR considers that sonographers should be regulated to the same standards as medical practitioners undertaking ultrasound.”

1. Direct-entry post-graduate courses are available at the Universities of Derby and Cumbria. Dedicated undergraduate training is now being delivered by Birmingham City University and apprenticeship routes are under development.
2. In its 2017 Securing the future workforce supply report report into sonographer provision, The Centre for Workforce Intelligence detailed around 3.5 per cent of England’s estimated 2,300 sonographers had no official or voluntary registration status. 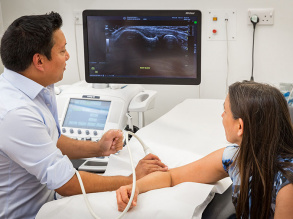