RCR Vice-President for Clinical Oncology Dr Jeanette Dickson blogs about the major developments in her specialty during the past 70 years and looks ahead to future advances, as we celebrate the health service’s 70th birthday on Thursday 5 July.

Over the past few weeks, media and political attention has, understandably, focused heavily on the challenges facing the NHS as it marks its 70th birthday, especially in relation to workforce and long-term sustainability.

Last week the RCR released its annual census, providing an overview of the clinical oncology workforce. The ongoing and projected future shortages do not make comfortable reading, either for those delivering the service or those wishing to access world-class cancer care.

Cancer remains firmly in the political spotlight, and the College awaits with interest the final plans from NHS England, as well as the devolved nations, on how the financial windfall will be used to support improved cancer care.

Despite expressed concerns, like others, I think there is a huge amount to celebrate about the NHS and advances in clinical oncology over the past 70 years. More than most specialties, clinical oncology has seen massive advances in the evidence base, treatment delivery technologies and drug development. In addition, there has been a welcome inclusion of the patient in their own healthcare decisions. Going forward, the future remains promising with continued exciting developments on the horizon.

In 2018, the NHS will deliver more than 130,000 courses of radiotherapy, all supported by a robust evidence base, much of which has been established by UK generated trials. The workhorse of modern radiotherapy, the linear accelerator (LINAC), treated its first patient in London in 1953. These machines, which bear scant resemblance to their ‘50s counterparts, are now found in every one of the UK’s 62 cancer centres and are fundamental to the 40 per cent of cancer cures directly attributable to radiotherapy.

The evolution of imaging techniques over the past 70 years has had a direct impact on advancements in radiotherapy. Before CT and MRI, clinicians determined the position of cancer via skin landmarks and two dimensional X-rays. Fusion of state-of-the-art cross-sectional and, increasingly, functional imaging with radiotherapy planning scans now allows clinical oncologists to map precisely the location of the cancer and modify that treatment in real-time thanks to 'on board' imaging.

Increased computing power in the 1980s and ‘90s enabled oncologists and medical physicists to develop advanced planning algorithms able to conform the radiation dose levels delivered to tumours and surrounding normal structures. The first intensity-modulated radiation therapy (IMRT)-capable machines appeared in the 1990s. However, IMRT rollout across the UK, although increasing, remains slower than ideal.

The 1960s through to the 1990s saw the creation and refinement of gamma knife technology, which delivers intracranial stereotactic therapy (SRS) using cobalt therapy. Today, the commissioning of SRS sits within the trauma national programme of care, leading to a fragmented service delivery strategy for those patients, especially for those patients with brain metastases.

The past two decades have also witnessed the emergence of stereotactic body radiotherapy (SABR) – extremely high doses of radiotherapy delivered to small volumes, with minimal damage to surrounding normal structures. SABR can be delivered via a number of platforms, including modern LINACs, and is currently limited to a narrow range of conditions in 23 centres in England. Scotland has supported the role out of SABR to all centres to widen patient access. A programme of trials is being used to gain evidence of efficacy, a model which the NHS England commissioning structures are best placed to deliver.

Later this year, we will also see the launch of fully commissioned, UK-based, high-energy proton beam therapy. This will especially benefit the youngest cancer patients and those with very rare tumours, adjacent to critical structures such as the brain stem. There will also be a strong underpinning research programme, which will develop the evidence base around this exciting particle therapy.

The lifetime of the NHS has also seen the increased emphasis on combined modality therapy, which clinical oncologists are best placed to deliver by virtue of their training. Inoperable cervical cancers can increasingly be cured by chemotherapy delivered concurrently with external (LINAC-based) and internal (brachytherapy) radiation.

Novel radioactive isotopes such as radium 223 have been developed which bind specifically to cancer cells, reducing treatment-related side-effects.

Over the next ten years, we should start to realise the potential of magnetic resonance scanner-enabled LINACs, which can monitor changes in tumour position during the delivery of radiotherapy. This fusing of different imaging modalities will allow real time adaptation of radiotherapy treatment plans around tumour and normal tissue movement, minimising the impact of radiation on normal tissue.

Great strides are anticipated when newer immunotherapy drugs are used in combination with radiotherapy, and we hope that these systemic therapies will work to boost the local tissue immune-related changes that radiotherapy produces.

We look forward to a time in the not too distant future when advances in genomics will mean cancer patients have their tumours 'decoded', enabling clinicians to prescribe targeted, fully personalised systemic and radiotherapy for each individual.

Overall the NHS and clinical oncology have travelled a great distance over the past 70 years. We hope the coming decades will build on improved therapies and increased patient access feeding through into improved patient outcomes. 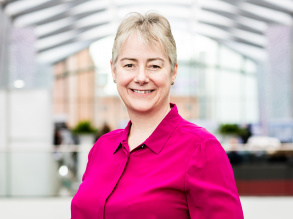