RCR Vice-President for Clinical Radiology Dr Caroline Rubin blogs about how far imaging has come during the past 70 years, as we celebrate the health service’s 70th birthday on Thursday 5 July.

In a week where we are rightly celebrating the birth of NHS and debating vital questions around its future sustainability, the College’s leadership has been reflecting on just how transformative our speciality and its technology has been to modern healthcare.

The evolution and proliferation of imaging modalities since the birth of the NHS has had a huge impact on patient treatment and outcomes, as well as shaping the system itself.

In 1948, a pregnant woman with a bleed would have been at the mercy of time before she found out the fate of her unborn child. Now, the gravity of the situation can be diagnosed within minutes using ultrasound.

Seventy years ago, if you survived an acute ischemic stroke your prognosis was poor, and you would likely to be consigned to long-term rehabilitation. Now, with luck, you can access mechanical stroke thrombectomy at the hands of an interventional neuroradiologist and make a near-immediate recovery.

The advent of television and advances in electronics in the 1960s had a huge impact on diagnostics. As a result, the ‘60s witnessed the development of the image intensifier, which boosted the clarity of fluoroscopic X-ray procedures, as well as the commercial spread of ultrasound devices.

While the use of radionuclides in brachytherapy had a long history by the ‘60s, that decade also saw a revolution in nuclear imaging as gamma cameras were developed, enabling radiologists to use gamma-ray emitting radioactive tracers to make functional diagnoses of internal organs. The ‘50s and ‘60s also saw the academic development of single photon emission computed tomography, before developments in tracers enabled its more widespread use in the 1980s.

The invention of computerised tomography (CT) scanning in the early 1970s heralded a paradigm shift in imaging. The first CT scanner took days to reconstruct an image. Nearly 50 years on and the rapid diagnostic capability of multi-slice spiral CT machines makes them fundamental to emergency and ambulatory diagnostics, as well as to cancer staging.

The boom in computing power has meant newer scanners are able to support powerful software capable of incredibly advanced image reconstruction. As well as advances in scanners, IT developments also revolutionised the way imaging departments run and patient scans are accessed by clinicians. In 1996, Hammersmith Hospital in London became the first in the world to go 'filmless' with the introduction of a centralised, digitalised Picture Archiving and Communication System (PACS).

All imaging modalities have their own benefits, are constantly being enhanced and are integral to today’s NHS, which now carries out more than 40 million radiological studies every year in England alone. The vast majority of those are plain X-rays and ultrasound scans, but thanks to the astounding advances of the past 70 years, CT and MRI scanners and gamma cameras can be found in most hospitals, giving patients and their physicians local, fast access to an array of imaging investigations unimaginable in 1948.

These imaging technologies have developed alongside a refined arsenal of modern interventional radiology devices, from biopsy needles to guide wires and stents, meaning today’s radiologists are also extremely hands-on, as well as specialising in intervention – from using fine needle aspiration to drain breast cysts, through to carrying out arterial embolisation to stop a life-threatening haemorrhage.

Imaging has been, and remains, fundamental to the NHS. It is integral to the majority of patient diagnoses and the image-guided minimally invasive ’surgery’ practised by interventional radiologists is a significant non-invasive treatment option. The RCR believes the future of imaging within the health service will be directly linked to, and supported by, the development of artificial intelligence.

AI has the potential to sift through massed imaging data and metadata in seconds without getting tired, giving radiologists a superhuman aid to help prioritise worklists and diagnoses. We are already seeing a variety of brilliant AI trials being led by radiologists – including programmes that detect various cancer nodules and model pulmonary hypertension – and the RCR looks forward to working with clinicians to monitor and guide the development of widespread imaging AI over the coming decades. 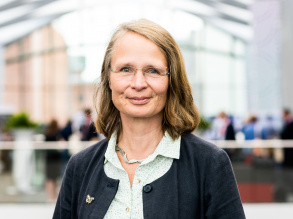