NHS must do more to future-proof its MRI capacity, say imaging experts 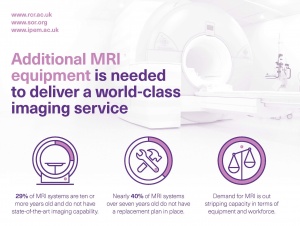 Imaging experts are urging hospitals to formulate clear plans to replace outdated equipment, after a survey revealed half of healthcare organisations do not have set renewal plans, and more than a third of older magnetic resonance imaging (MRI) scanners are not scheduled for replacement.

While many hospitals are operating newer equipment, 58% of MRI systems used by those surveyed are at least five years old, meaning they may not be able to conduct state-of-the-art imaging, such as that needed for certain types of heart and prostate cancer scanning. Nearly a third (29%) of systems are over ten years old.

The Clinical Imaging Board (CIB) – a collaboration between The Royal College of Radiologists (RCR), the Society and College of Radiographers (SCoR) and the Institute of Physics and Engineering in Medicine (IPEM) – surveyed NHS radiology departments across the UK to gauge the state of MRI equipment1.

Today, the CIB has released its survey findings in a report entitled, “Magnetic Resonance Imaging (MRI) Equipment, Operations and Planning in the NHS”.

The CIB survey, which collected data relating to 171 scanners used across the UK revealed;

We know the UK’s MRI capacity is stretched compared to other countries. The UK has 6.1 MRI systems per million people, fewer than countries including Estonia and Slovenia. By comparison, the US has 38.1 scanners per million and Germany has 30.53.

As well as assessing the state of their equipment, clinicians were also asked to estimate future MRI workload.

On average, departments expect to see demand rise by 13% this year. In addition to upgrades and the replacement of old systems, the radiology teams surveyed said they will need approximately 50 brand new scanners to meet escalating demand for imaging.

Dr Nicola Strickland, Chair of the CIB and President of the RCR, said:

“While many hospitals have MRI replacement plans in place, it is concerning to see others do not appear to be planning for the future, especially when it comes to those working with older machines. That nearly 40% of MRI scanners that are seven or more years old are not destined for replacement any time soon is a real worry.

“Radiology departments are already struggling with ever-growing workloads and not enough staff, and many now face working with outdated equipment.

“The NHS needs to invest in the future of imaging and help radiology teams plan ahead – regardless of whether their MRI systems are two, five or ten years old, hospital managers must ensure they have appropriate plans in place to replace scanners as they age and technology continues to improve.”

Magnetic Resonance Imaging (MRI) Equipment, Operations and Planning in the NHS is available to download now.

Notes to editors
Release issued by the RCR on behalf of the CIB. For more information or to arrange an interview please contact the RCR media team via media@rcr.ac.uk or on 020 7406 5941.

1. The CIB surveyed radiology teams between March and November 2016 and received responses from 73 organisations in relation to 171 MRI systems, representing 42% of the UK’s installed MRI systems. (Based on the English responses, the survey had responses relating to 33% of NHS England’s scanners.)
2. European Society of Radiology. Renewal of radiological equipment. Insights into Imaging 2014; 5: 543–546.
http://link.springer.com/article/10.1007/s13244-014-0345-1
3. Organisation for Economic Co-operation and Development (OECD). Magnetic resonance imaging (MRI) units 2013.
https://data.oecd.org/healtheqt/magnetic-resonance-imaging-mri-units.htm

Magnetic resonance imaging (MRI) scanners use strong magnets and electromagnetic waves to produce images of the inside of the body. They use the movement and tissue environment of hydrogen atoms in a person’s body to image body parts and brain functioning. An MRI machine is a large tube which patients lie inside to be scanned.

The quality and complexity of MRI imaging continues to improve as new scanning techniques and technology develops.

While there are generally no major issues with the reliability of older scanners (something which was noted by the CIB survey – older units can still work well), the prevalence of older, less advanced scanners means that it is not possible for some organisations to perform state-of-the-art examinations, such as cardiac and multi-parametric prostate MRI imaging.

The Clinical Imaging Board is a collaboration between the Royal College of Radiologists (RCR), the Institute of Physics and Engineering in Medicine (IPEM) and the Society and College of Radiographers (SCoR) and builds on the work of the former National Imaging Clinical Advisory Group. It provides a single professional focus for imaging in the UK for the NHS and other service providers, as well as commissioners, Governments, regulatory bodies and other professional groups.

The current Chair of the CIB is Dr Nicola Strickland, President of the RCR.

The MRI report was commissioned by the Clinical Imaging Board, an intercollegiate Board representing the RCR, SCoR and IPEM.