The NHS does not have enough radiologists to keep patients safe, say three-in-four hospital imaging bosses

The report highlights the UK’s current and predicted shortage of radiologists and urgently calls for more funding for trainees and improved retention and recruitment.

Hospitals reported there were 379 unfilled consultant radiologist posts across the UK in 2018, two thirds of which (61 per cent) were vacant for at least a year.

Asked whether or not their imaging departments had enough radiologists to deliver safe and effective care, 75 per cent of radiology leads said they did not, with 49 per cent strongly disagreeing that they were staffed to safe levels.

Departmental bosses anonymously commented that their staff shortages meant, “delayed diagnosis of cancer and critical findings”, “working increasingly fast and becoming unsafe” and being “unable to provide a safe and reliable radiology service”.

It found only one-in-five trusts or health boards have the number of consultants needed to provide safe levels of 24/7 emergency interventional care, and the RCR estimates the UK is now short of at least 379 interventional radiologists.

To cope with the rising demand for scans and the lack of radiologists, hospital outsourcing costs are rocketing.

Outsourcing costs have shot up across all UK nations, with the biggest escalations in Scotland, where costs more than doubled from 2017-18, and Wales, where expenditure went up by 80 per cent from year-to-year (see breakdown table below).

For hospitals to keep up with the demand for diagnostic and interventional radiology – and not have to pay for outsourcing, overtime and locum cover – the UK currently needs at least another 1,104 radiology consultants. If nothing is done to address the staffing crisis, the gap is predicted to rise to 1,867 by 2023, which would leave the workforce 31 per cent understaffed.

To make up the shortfall, the number of trainee radiologists needs to treble, from 265 to 808 new placements every year.

“Diagnostic and interventional radiology is fundamental to modern healthcare, from getting a fast, accurate diagnosis to planning surgery to cancer care and trauma management.

“The UK-wide shortage of radiologists is not news to the RCR, but service leaders are now telling us loud and clear that staff shortages are putting patients at risk, with three-quarters saying they cannot guarantee a safe service.

“Trusts and health boards desperately need to recruit, but our report shows that new consultant numbers and overseas and locum appointments are just not enough to plug staffing gaps. As a result, our radiologists are exhausted and the NHS bill for outsourcing scan reporting continues to climb into the hundreds of millions.

“The RCR has been working to enhance training for clinicians in key shortage areas, including breast imaging and emergency stroke treatment, but the big picture remains that to keep our patients safe in future we urgently need more central funding to train thousands of new consultant radiologists.

“UK and devolved governments have repeatedly made announcements about improving cancer patient pathways and survival rates and investing in diagnostic capacity, as well as the need to staff the NHS sustainably. Health service leaders need to understand that patients are suffering now due to a lack of radiologists, and promised advances in care will only be realised if we see a serious increase in consultant numbers.”

2017-2018 outsourcing changes have been derived from comparing the 2018 clinical radiology census and the 2017 report. To view the 2017 report please visit: https://www.rcr.ac.uk/system/files/publication/field_publication_files/bfcr185_cr_census_2017.pdf 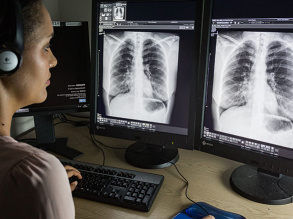