Get to know Dr William Ramsden, Vice-President for Clinical Radiology

We interviewed Dr William Ramsden, our new Vice-President for Clinical Radiology. We found out about why he stood for office, his views on getting involved with the RCR and the best advice he's ever been given.

Why did you decide to stand for office?

I was Medical Director, Education and Training at the RCR from 2016–19 and really enjoyed working with colleagues to try and build training, help trainees and improve patient care. I found that the RCR was a very friendly and supportive environment with great potential to do good and was keen to become involved again to help Fellows, members and their patients.

What made you choose clinical radiology as your specialty?

I was interested in anatomy and radiology is very much based on anatomy. Also, when I went into radiology, it still felt like a slightly unusual career choice and something that wasn’t quite mainstream, so I liked the idea of that. It was a specialty that was expanding, with numerous technological advances, and it felt a very exciting place to go. I have never regretted it, and a career in radiology has always felt fulfilling and worthwhile.

What is your favourite thing about your job?

The people. I am a paediatric radiologist and the people who are really important to me as a doctor are the patients, their mums, dads and carers, and all the colleagues I work with.

What would you say to anyone considering a career in clinical radiology?

Try us out and see what we are about! When people look at radiology from the outside, they sometimes don’t see how exciting or how interesting it is. If you do a taster day or come down to the department and watch people at work, you will see something really good.

Again, the people. It is more than the people in the College, who are so helpful and supportive. It is also about the people we are trying to help, especially patients, Fellows and members.

What advice would you give to any Fellows or members thinking about getting involved with the RCR?

Please do. There are numerous roles at the College, truly something for everyone. It is vital that the RCR becomes a more inclusive organisation, more representative of its Fellows and members and the patients they serve. For those of us already involved, it is vital that we encourage colleagues from currently underrepresented groups to join the RCR’s work.

What is the best piece of advice you have ever been given?

Always see things through, finish things off and don’t leave things half done. I’ve found that very helpful over the years.

Who inspires you and why?

The people who I try and help, because they are so important to me and my work – particularly the patients, their mums, dads and carers, and the Fellows and members of the RCR.

It is very difficult to answer a question like this. I have the great good fortune to have a clinical career I love and another training other doctors, and have been lucky enough to progress from one post to another. Now I have the new challenge of leading the Faculty of Clinical Radiology. If I can be successful in this role, it will feel like a great achievement.

Dr William Ramsden has been a Consultant Paediatric Radiologist in Leeds since 1994, initially at St. James’s University Hospital and subsequently at Leeds Children’s Hospital. His undergraduate medical training was undertaken at the University of Southampton, and he trained in radiology in Manchester and Leeds, passing the FRCR in 1993.

He was Medical Director, Education and Training at the RCR from 2016–19. Prior to that, he co-led the development of the Leeds and West Yorkshire Radiology Academy (2003–07), was Training Programme Director for The Leeds/Bradford radiology training scheme (2008–12) and Head of The Yorkshire and The Humber School of Radiology (2012–16). He holds a Doctorate in Education, awarded by the University of Leeds in 2014 and is an honorary Clinical Associate Professor at the same institution.

Outside radiology he is a keen hillwalker, particularly in Scotland, completing the Munros in 2001, the Corbetts in 2017 and at present walking the Grahams (Scottish 2,000 ft hills). He is also currently undertaking a part time master’s degree in Railway Studies at the University of York. 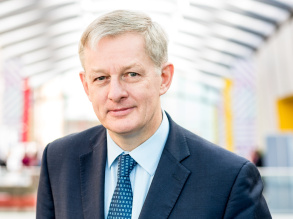