Get to know Dr Hannah Tharmalingam, Vice-President for Clinical Oncology

We interviewed Dr Hannah Tharmalingam, our new Vice-President for Clinical Oncology. We found out about why she stood for office, her views on getting involved with the RCR and the best advice she's ever been given.

What made you stand for office?

I’d done some work at the RCR as a Clinical Fellow in education and Vice-Chair of the Oncology Registrars' Forum. In both roles, I was struck by the relative lack of influence of trainees and new consultants which didn’t really make sense to me. These clinicians will be leading the speciality over the next 30 years so why shouldn’t they play a significant part in defining its strategy and its future? I think it would be great to see more junior Fellows in Officer roles across both Faculties.

What made you choose clinical oncology as your specialty?

I was looking for a specialty that allowed me to be involved with patients on a one-to-one basis over a long period of time, throughout their ‘journey’ if you like, and oncology is very much suited to that. I applied to both clinical and medical oncology as I think both specialties have their own attractions, but was particularly keen on the variety provided by radiotherapy. As a trainee, I was fortunate enough to rotate through a brachytherapy post which shaped my career path and I haven’t regretted my decision since.

In general, it’s a fun and friendly place to be. I’ve found it a welcome safe space outside of the clinical grind with the opportunity to work with a variety of people from different backgrounds and walks of life from whom you can really learn a great deal.

Which parts of the RCR would you like to see Fellows and members become more involved with?

All of them! The RCR should not be seen as a Private Members’ Club. It belongs to the Fellows and members, not the Officers. It is so important that we have as many different people involved in every aspect such that the RCR remains representative and relevant to both its membership and the public.

If you could give one piece of advice to medical students considering a career in clinical oncology, what would it be?

Do it! It’s a great specialty with plenty of variety. Most importantly, though, find yourself a mentor. Someone who you trust and who will guide and support you in your best interests; teaching you how to think, not necessarily what to think. They are not always easy to find and you might not get it right first time, but keep looking, they will be worth their weight in gold.

What is the best thing about your job?

There are two things – the patients and my colleagues. I am lucky that the people I work with are genuinely some of my closest friends. They have got me to where I am today and I know I could not and would not do my job without them.

I would love to be able to play the electric guitar, just because I think it’s sexy. I currently excel at the air guitar - in my head, I’m Hendrix.

What is the best advice you have ever been given?

‘Be kind, stay humble, dream big, act brave. In that order and you’ll find it hard to fail.'

​Who inspires you and why?

The Obamas; both of them. Theirs is an incredible story of courage, dignity and strength of vision that I doubt will ever be told again, certainly not in my lifetime.

Winning our Fantasy Football League three years in a row. I challenge anyone to take me on, even Fergie!​

Hannah Tharmalingam trained in medicine at the University of Oxford graduating in 2009 with a First-Class Honours degree. She trained in clinical oncology in North London within which she completed an MD (Res) degree evaluating advanced radiotherapy techniques in high-risk prostate cancer. She was appointed a consultant in clinical oncology at Mount Vernon Cancer Centre in 2019 where she specialises in gynaecological and urological malignancies with an interest in HDR brachytherapy.

She has a strong interest in medical education and was awarded an Associate Fellowship of the Higher Education Academy as a trainee. At the RCR, since 2017, she has been a Clinical Fellow in education leading on the re-write of the curriculum and the new joint training pathway model with medical oncology as well as an associate member of the FRCR Part 2A Examination Board. During this time, she was also Vice-Chair of the Oncology Registrars’ Forum representing trainees on various RCR boards and committees.

Her other interests include radiotherapy advocacy, global health and Arsenal F.C. She spends far too much of her spare time worrying about her Fantasy Football team. 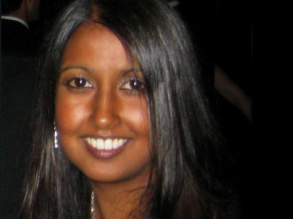