Dr Katharine Halliday has been elected as the next President of The Royal College of Radiologists (RCR).

Dr Halliday's term in office will start on 1 September 2022, when she will take over from our current President, Dr Jeanette Dickson, for the next three years.

After completing her radiology training in London, Australia, Sheffield and Nottingham, Dr Halliday was appointed as a Consultant Paediatric Radiologist at Nottingham University Hospital in 1998. She has a special interest in the imaging of suspected physical abuse and provides expert opinions for cases throughout the UK. She was Chair of the British Society of Paediatric Radiology from 2010-2016 and chaired the working group for the updated guidance for imaging in cases of suspected physical abuse in children.

In September 2017, Dr Halliday was appointed National Clinical Lead for the Getting It Right First Time (GIRFT) programme for Radiology, and the Radiology GIRFT report was published in July 2020. Dr Halliday took over as Clinical Director for Radiology at Nottingham University Hospitals in January 2021.

‘I am honoured to have been elected as the next RCR President and delighted to have the opportunity of working with you all in the exciting years ahead. Thank you so much for the faith you have placed in me – I promise to give it my all.’ 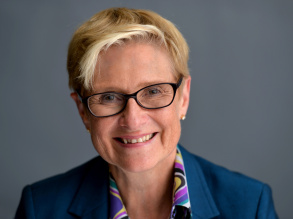