What is proton beam therapy?

Proton beam therapy (PBT) is an advanced form of radiotherapy, with radiation treatment delivered by accelerated proton beams rather than X-rays. A proton beam delivers some radiation to healthy tissue in reaching the tumour but very little radiation beyond the edge of the tumour being treated. This means PBT is able to treat cancers just as effectively but delivers less radiation to other healthy parts of the body which surround the tumour.

PBT is being used increasingly to treat children with cancer. The chance of curing the cancer is no higher than with conventional radiotherapy but is likely to reduce the severity of the long-term side-effects, although it will not eliminate them altogether.

For adults, the main use of PBT has been to treat cancers close to parts of the body which are very sensitive to the damaging effects of radiation. For example, PBT is used to treat certain cancers at the base of the skull, deep inside the head and close to the brain, and cancers of the spine which are close to the spinal cord.

Proton beam therapy is rarely used on its own. The majority of patients will have had some surgery and/or chemotherapy in conjunction with the radiotherapy.

PBT is delivered by very large, complex machines which are very expensive to build. Until recently, UK patients undergoing PBT would have to travel abroad to centres in the USA, Japan and some European countries for treatment. But with two new PBT centres - one at The Christie Hospital, Manchester, which opened at the end of 2018 and another at University College Hospital, London, which opened in late 2021 - means PBT patients can avoid major disruption to families’ lives.

Having centres in the UK means new uses of PBT can be explored and developed through national and international clinical trials. Close monitoring of outcomes and side effects is producing a significant evidence base for future analysis of the benefits of PBT.

Further information about PBT services in England is available from NHS England. In addition, Cancer Research UK has produced a comprehensive briefing on PBT in the UK.

PreviousWhat is the future of clinical oncology? 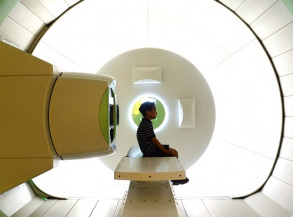