History of the College

Although a relatively young Royal College, The Royal College of Radiologists (RCR) can trace its roots back to the Röntgen Society founded in 1897.

Current and former homes of The Royal College of Radiologists

The Royal College of Radiologists has been based at 63 Lincoln's Inn Fields in London since July 2013.

The British Institute of Radiology provided the first offices for the Faculty of Radiologists at 32 Welbeck Street for a few years. From 1944 to 1973, the Faculty existed under the wing of the Royal College of Surgeons of England in Lincoln’s Inn Fields. The next move was to Berners Street as guests of Ilford Ltd before room became available at 38 Portland Place. The move to 38 Portland Place followed an appeal for funds launched in 1972 with the Right Honourable Lord Robens of Woldingham as Chairman of the Appeal Committee and with Professor Howard Middlemiss, President of the Faculty, as its driving force. A large proportion of the money raised was contributed by the Fellows of the Faculty themselves. There was generous support by private individuals and from industry. The building was formally opened on 19 December 1979 by His Royal Highness, the Duke of Edinburgh who was admitted as an Honorary Fellow.

Portland Place in London was designed and built between 1774 and 1776 by the renowned Scottish architects Robert and James Adam as a wide thoroughfare with an uninterrupted view north towards Marylebone Park. The first owner of 38 Portland Place, Mr John Hall, took up residence in 1777. Later occupants included a Lord Chief Justice, a general, a playwright and a physician.

Within a few years of the College taking up occupation of 38 Portland Place, it was clear that more space was required. The generous legacy of Dr Constance Wood, a past President was used in 1990 to provide an extension to the rear of the building. In the early years of the 21st century, the College once again found itself in need of more space and sought new premises at 63 Lincoln's Inn Fields.

Designed by William Simmons and built in 1880, it was one of the first concrete buildings in London. Its flat roof was a new design feature, of which Simmons was a great enthusiast. It has a substantial forecourt, a large basement, a ground floor and six upper floors. The main elevation is clad in yellow sandstone. Neighbours in the Square include the Royal College of Surgeons of England, the London School of Economics, the Association of Chartered Certified Accountants, Sir John Soane’s museum and the Inns of Court itself.

63 Lincoln's Inn Fields has been designed to meet the needs of RCR Fellows and members who visit the building, as well as those who want to access the facilities remotely. As such, the building has been generously equipped with data and power and a supporting technological infrastructure which enables and supports examinations, CPD and scientific meetings, business meetings, dinners, lectures, public facing events, receptions, as well as administrative and office functions.

The Coat of Arms

The Coat of Arms is an important part of the College's heritage. The then Fa 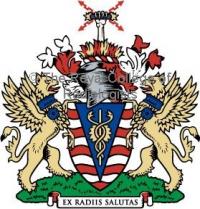 culty of Radiology received from the College of Arms in 1961 a Coat of Arms. The Blazon of Arms (official description) is as follows:

Arms. Barry wavy of ten Argent and Gules on a Pile Azure on X-ray Tube Or irradiated at the centre also Or and entwined of two Serpents Gold

Crest. On a Wreath of the Colours Issuant from Flames alternately Gules and Or a Skeletal Cubit Arm proper the Hand grasping a Thunderbolt fessewise also proper.

Supporters. On either side a Griffin Or collared Azure and charged on the shoulder with a Rose also Azure.

The motto Ex Radiis Salutas at the bottom of the crest has been translated from the Latin to mean 'From Rays, Health'.

Past Officers of the RCR