Addressing the severe radiologist workforce shortage in the UK remains a high priority for the RCR. Now in it’s tenth year, with a 100% completion rate, the annual workforce census provides vital, highly detailed information that can be used to highlight to the Government and policy makers the increasing disparity between demands being placed on radiology departments and the workforce available to provide this.

Census data can predict the success or failure of ambitious NHS plans reliant on additional radiologist staffing, for example, early diagnosis of cancer via rapid access diagnostic centres, new or proposed screening regimens for prostate and lung cancer, seven-day NHS services and stroke thrombectomy. The absence of a viable workforce will stifle transformation in the short term.

The data have been and are being used to make the case for a stepwise increase in training numbers to Health Education England and the equivalent bodies in Northern Ireland, Scotland and Wales.

Alongside the full report, an infographic has been produced highlighting the key findings from this year’s census 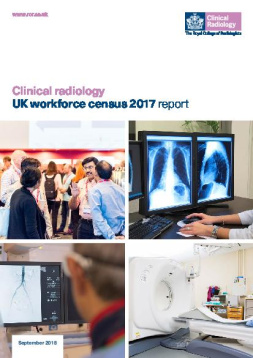