The radiologist workforce remains the key focus for the RCR; the data collected in the census underpin our work to influence UK healthcare policy and to make the case to governments and regulatory bodies to increase clinical radiologist training numbers.

Awareness of the ongoing shortage of radiologists in the face of increasing clinical demands has been established with governments and regulatory bodies based on information collected through the RCR annual workforce censuses. The information also feeds into policy initiatives, for example, on access to imaging services, early diagnosis of cancer and seven-day NHS services. Successful implementation of these initiatives is dependent on the sufficient availability of radiologists. The format and scope of this report closely follows those published since the first RCR workforce census in 2008. The 2016 report highlights the ongoing mismatch between demand for clinical radiology and the workforce available to deliver this service, and also indicates that the strain on the workforce is likely to increase given how few trainees are coming in to the specialty compared to how many are expected to retire over the next five years.

An infographic highlighting the key findings from the 2016 census is also available. 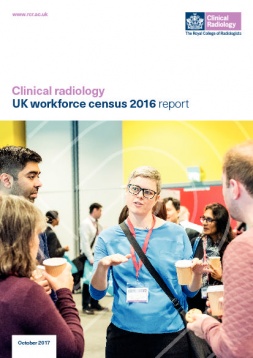