The announcement of the new Secretary of State (SoS) for Health and Care was made on the evening of 5 July when I, along with a large number of college Presidents, were listening to a speech by Ed Argar, then Minister of State for Health. As Ed spoke, a colleague spread the news by WhatsApp around the room, followed very rapidly by the vibration of Ed’s phone. At that level of politics, it is not often your audience know who your new boss is before you do – interesting times indeed.

Less than 48 hours after we welcomed a new SoS, I attended the Academy of Medical Royal Colleges (AoMRC) Council. A challenging meeting at the best of times – 23 national leaders from every college and faculty in one room tends to result in opinions being expressed, often forcibly. The comfort break, with unanimous agreement, was moved to allow us all to watch Boris Johnson’s resignation speech. I will not comment, other than to say, as an appraiser, reflection did not seem to play a tangible part.

While the leadership (and, by extension, the Prime Ministerial) race is played out on the media over the coming weeks, the question of what this will actually mean to the NHS and for our patients comes to the fore. Business as usual continues but, I suspect, few lasting commitments will be made or new policies agreed, worrying at a time when the NHS needs strong leadership to manage the COVID-related backlog in parallel with the continuing impact on COVID-19 itself. The NHS is used to managing uncertainty but that needs free time and headspace, both of which are in extremely short supply at present. Given the parlous state of the workforce, highlighted by the RCR workforce census reports and, most recently, the Health and Care Select Committee expert report on how the government has delivered its stated policy objectives on workforce (not great), ‘business as usual’ may actually represent a retrograde step.

The approach of summer holidays means a winding down of external events. The European Society of Radiology (ESR) held their first face to face meeting in Vienna, postponed from March. The RCR was ably represented by the Vice President of Clinical Radiology, William Ramsden, and CEO, Oliver Reichardt. I travelled instead to the United Kingdom Imaging and Oncology Congress (UKIO) in Liverpool with Kath Halliday, my successor. I shared my thoughts on the events of the past three years and Kath and I spoke about the future direction of travel for the RCR. Later that week, I spoke at the Digital Imaging Summit about our new ‘Recommendations on Alerts and Notification of imaging reports’ document – developed in collaboration with sister colleges under the auspices of AoMRC and approved by their Council. Developed at the behest of the Health Safety Investigation Bureau (HSIB), this document firmly places the responsibility for alerts where they should be, with all of us. This is a system problem to own, not something the RCR can solve alone. We have exemplars of best practice which we can share, but the NHS can only solve this knotty problem by different siloed groups coming together. Collaboration for pernicious problems, not going it alone, can only benefit patients, which is why we are here. 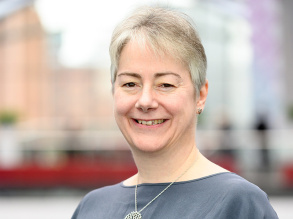