The Prime Minister has announced £200m will be spent replacing aging scanners across English hospitals.

The Government has identified more than 80 trusts across England in most need of new CT, MRI and mammography scanners, with hospitals able to access the funding over the next two years.

The move comes as part of the Government's commitment to improve cancer detection rates, which is a key focus of the NHS England Long Term Plan.

The Royal College of Radiologists (RCR) has welcomed the new money, while cautioning that increased scanner capacity must be supported by an increase in radiologist numbers.

“Patients and hospitals deserve the best medical imaging equipment, and we very much welcome £200m of much needed capital investment.Targeted funding to replace aging scanners is long overdue – a 2017 survey revealed that nearly a third of NHS MRI scanners were technically obsolete.

“Higher scanner throughput may require more support staff to look after patients before, during and after their procedure. Without doubt it will increase the need for more radiology staff to interpret increased scan output from the new equipment. With a tenth of radiologist jobs unfilled, and a scan outsourcing spend of nearly £140m last year, English hospitals are already desperate for more radiologists.

“The Government and NHS England have a great opportunity to safeguard what is a crucial component of cancer care by committing to grow the radiologist workforce in the forthcoming Long Term People Plan.” 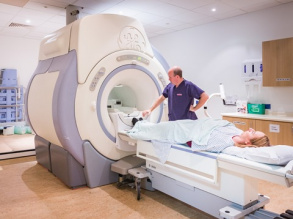 Patient in an MRI scanner