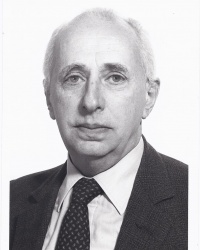 Robert Emil Steiner was born 1918 in Vienna. After a happy childhood, political and racial iniquities soon oppressed his early student years at the University of Vienna, and spelt emigration.

He made for Dublin, where he was able to resume medical studies at University College. He qualified in 1943; and it was only a year later that he published his first paper, in the British Medical Journal, on serum hepatitis following transfusion. That was to be the beginning of a massive research record, amounting to well over two hundred publications.

It was also in Dublin that he met Gertrude Margaret Konirsch; their marriage spanned nearly 70 years – of bliss, with two daughters. After his junior medical posts, they went to Sheffield after the end of WWII, and he began training in radiology. In 1950 he applied for a Lecturer/Hon. Consultant post at Hammersmith Hospital, then the British Postgraduate Medical School. John McMichael had been its Professor of Medicine for four years, and was on the look-out for a dynamic and research-minded radiologist who could galvanize the rather staid X-ray department. Robert Steiner quickly became Senior Lecturer and departmental Director (1955), and was appointed Professor of Diagnostic Radiology in 1961.

He was the University of London’s sole Professor of Radiology, with its 12 undergraduate medical schools; the BMJ later described his department as a ‘beacon light’ to British radiology. Robert Steiner and his colleagues-in-arms, John Laws and Frank Doyle, made the department a model of university radiology, of research/service/ teaching side-by-side. He was strongly supported in this by John McMichael, whom he would always hold in the highest esteem: they were kindred spirits.

Robert Steiner’s unique record and influence were not achieved through showmanship but by his work and élan. He was constantly on the go, and intent on having everyone else on tiptoe also. Junior staff were always aware that The Prof was around, and might drop in at any moment, asking what was happening. It made for a marvellous tension – you knew you had to justify what you were at. The slackening of this voltage when he was away was immediately perceptible, and might be greeted with relief for a day or two; then you realised that life without The Prof was lacking its customary Hammersmith edge. He took an interest in everything and everybody. In general, he was first in and last out of the place; at 7.30 am his door was open for anyone, with however trifling a query or personal matter, who had the good sense to look in on him at that quiet hour.

He was a general who led from the front. No foot soldier was too lowly to be gathered up by him, to be asked ‘what is going on’, and thus made to redouble his efforts. Robert Steiner’s essential kindness was laced with stern demands; you knew where you were, and quickly found out if you did not live up to expectations. Scott Fitzgerald and he were at one: ‘I never blame failure – there are too many complicated situations in life – but I am absolutely merciless toward lack of effort’. This generosity of purpose, so clearly displayed for his staff, earned total devotion, and had important knock-on effects outside his department. Meeting such exceptional warmth and humanity was inspiring, and fired an interest in what the man and his discipline might be about.

The department itself was glued into one body by the fact that everybody and everything mattered. Strong social ties made this one family, and Robert and Gertie’s regular parties for the whole department, at their home, were just one ingredient. Gertie knew every junior staff member, the spouse and their children. And when the visiting professor disgraced himself there, drinking too much and vomiting all over the place, the departmental family revelled in the story with the boss and his wife.

It could be said that the decades of Robert Steiner’s professorship at the Hammersmith were naturally golden years – a period of unprecedented growth for both radiology and the institution. But the fact is that it only happened under his leadership. His insistence on clinical anchorage in radiology, on the regular daily conferences with the clinicians from each ward, talking through their patients’ problems, was an important example. He was the dynamo that actually made the whole thing work. The people who realised this particularly clearly were the many overseas visitors. They would confide in the junior staff ‘you know, we have so many more resources back home, and yet we have nothing to equal this’.

Robert Steiner’s research work was centred on the cardiovascular system; in particular collaboration with John Goodwin, Jack Shillingford, Patrick Mounsey, and of course John McMichael himself. The early days of cardiac angiography at the Hammersmith, in the dark, with cassettes being pulled rapidly by hand for serial views, helped to lay a basis for ground-breaking clinico-radiological teamwork. The record of this research is in the 265 papers bearing Robert Steiner’s name, and his medical texts. Among these books, he always liked to single out Clinical Disorders of the Pulmonary Circulation (1960, with Daley & Goodwin); and Recent Advances in Radiology of which he edited volumes 5, 6, 7 and 8 (1975, 1979, 1983 and 1986).

In the 1960s, Robert Steiner, John Laws and Frank Doyle were still just that beacon light, not the establishment; ‘We could do with some clout in the College’ they might say. Success soon changed all that, beginning with Steiner’s award of the British Institute of Radiology’s Barclay Medal in 1966. Robert Steiner became Editor of the British Journal of Radiology, then President of the British Institute of Radiology (1972–73), and President of The Royal College of Radiologists (1977–80). There were honorary appointments to many important bodies at home, and honorary memberships and prizes of numerous radiological societies abroad. He was appointed CBE in 1979; and awarded the Gold Medal of The Royal College of Radiologists in 1986.

By this time he had retired from his chair (1983), but the Emeritus Professor just went on as the pioneer he had always been, fostering the new discipline of magnetic resonance imaging (MRI) at the Hammersmith centre bearing his name. It was only in his later years that ill health forced real retirement.

There was a large map on the wall at the Hammersmith to show where the pupils of what became the Royal Postgraduate Medical School had landed up: the world was dotted with them. A similar map of Robert Steiner’s pupils, friends and admirers would be an impossible undertaking – there are just too many. The frontispiece of the 7th edition of Recent Advances in Radiology (inserted against Steiner the editor’s persuasion) is a eulogy signed by a few of these friends and pupils. It simply says Si monumentum requiris, circumspice. That is apt comment for someone who changed British radiology beyond all recognition.

Reproduced with kind permission of The Times.