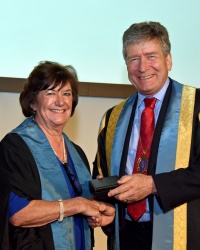 Judy was born in Liverpool, but spent much of her childhood in Northern Rhodesia (now Zambia) where her father was superintendent of a copper mine. She had 'pets' caught from the wild by her and her sister, including bush babies and a jackal she called Kimmie. Judy was a strong swimmer and also a skilled horserider and won prizes in showjumping and dressage for Northern Rhodesia. Boarding school at Roedean, near Brighton took her to her A levels followed by studying medicine at University College London where her skills in the sports arenas continued, representing her University in fencing.

Judy met Peter Adams at Addenbrookes Hospital, where he was a senior registrar and she a junior doctor and they were married in 1972. Peter became professor of medicine in Manchester.

Judy’s career in radiology started in 1972, gaining the Fellowship of The Royal College of Radiologists in 1975, becoming a lecturer in the University of Manchester in 1976, senior lecturer in 1979 and then professor in 1993, being then both head of the academic department and head of training of the Manchester radiology training scheme. She was elected a member of the International Skeletal Society in 1986 and awarded their gold medal in 2007. She has been a member of the European Society of Skeletal Radiologists since 1995 and was awarded Honorary membership in 2012. For The Royal College of Radiologists she has been an examiner (part I and part II), Regional Education Adviser, member of council and other boards, Dean and Vice President. She was awarded the gold medal of the RCR in Autumn 2016.  She has examined in Hong Kong, Singapore, Finland, Kuala Lumpur and has also been an external examiner to several Universities. In her NHS commitments she continued as an Honorary Consultant until her death. She has been Clinical Director of the Radiology Department at Manchester Royal Infirmary and Chair of the regional committee for Clinical Excellence awards. Judy combined this illustrious and full time career with raising a family of two boys, Charles and James.

Her research interests, maintained throughout her career, have been osteoporosis, fracture recognition and the measurement of bone mineral density, in which fields she has held £5.5 million in collaborative research grants, with £750,000 in still active research, resulting in over 200 peer-reviewed publications, 24 invited reviews and 34 book chapters, the last proof read only two weeks before her death.

Professor Adams worked tirelessly to emphasise the importance of identifying and reporting the presence of osteoporotic vertebral fractures and of commenting on bone density when possible to do so. In this regard, she was the first chairman of the ESSR osteoporosis committee, with a mission to raise awareness and expertise in osteoporosis amongst radiologists in Europe, collaborating with the International Osteoporosis Foundation (IOF) Vertebral Fracture Initiative in 2002. This produced a teaching and educational CD which was widely distributed at radiology and osteoporosis meetings around the world, updated in 2010 and very probably (hopefully) is in your own departments and has been studied by you, your colleagues and your trainees.

Aside from these impressive academic achievements, Professor Adams was outgoing and full of joie de vivre, delighting in recognising friends old and new at meetings around the world.