Skip to main content
Please note that login or registration to the RCR website will be unavailable for a period while we make improvements to the site. 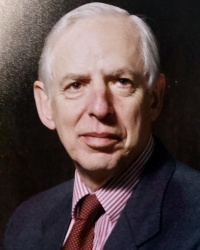 Dr Michael Ian Lavelle, husband of Suzanne and father of Martin, Claire and Tim, died aged 85 on 19 July 2020. Ian, as he was better known, was an Emeritus Consultant Radiologist at the Royal Victoria Infirmary (RVI) in Newcastle.

Having graduated from Sheffield University in 1957, Ian arrived as registrar at the RVI in Newcastle in 1966. In 1987 he was The Royal College of Radiologists’ representative on the then DHSS Committee for the testing of Digital Imaging Equipment.

In 1988, he obtained Newcastle’s first computed tomography (CT) scanner, supervising its installation and subsequent clinical use. This then 'state-of-the-art' technology opened further fields of research such as bone densitometry and 3-D reconstruction. Subsequently, he added a magnetic resonance imaging (MRI) installation by leasing the equipment, a unique method at the time.

He also set up an endoscopy unit with his RVI colleague Chris Venables, where they were one of the first teams to introduce flexible brass tubing. He was a member of the Radiology Committee British Society of Gastroenterology, and was active on numerous gastroenterology working groups.

Ian’s selflessness and compassion for others, was first noted in 1960, following his work in the Maldives during his Short Service Commission with the RAF Medical Branch. The Minister of State for the Commonwealth Relations Office, wrote: 'His work has left a deep impression on the local inhabitants, who have never before been able to get treatment for even the simplest ills. Ian never stinted the amount of time he devoted to the care and treatment of the Maldivians.'

From the start of his consultant career, Ian played an active role in teaching all grades of technical and medical staff, a commitment that dovetailed with his work as a Royal College Examiner. He was an Honorary Clinical Lecturer in Radiology at the University of Newcastle, from 1972-1994, but his work as an External Examiner also saw him develop close links with many universities, as well as being invited to oversee the FRCR exam in Hong Kong.

Ian held numerous lectures, in the UK, Europe and Middle East. He was a much-published, leading authority on various aspects of radiology and his views were sought extensively.

Ian was passionate about art and the natural world. He was a life member of Northumberland Wildlife Trust, a Fellow of the Royal Society for the Protection of Birds (RSPB) and was twice President of the Newcastle Pen and Palette Club. His watercolours were exhibited across Northumberland, a county that he cared so much about. His humour, his gentle nature and his concern for others were at the forefront of everything he did.

He is survived by his wife, three children and five grandchildren.