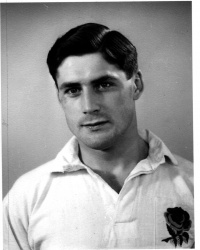 Lewis Cannell was a primarily a doctor, trained as a radiologist, but also remembered internationally as an outstanding rugby centre three-quarter. His England rugby career extended from 1948 to 1957 earning nineteen caps. There would have been more, but on two occasions he wrote to the selectors asking to be excused as he was taking medical exams, and he turned down the opportunity to join the British Lions tour to New Zealand and Australia in 1950 because he did not want to take six months off from his medical studies.

Born in Coventry in 1926, he attended Northampton Grammar School, (where he changed from soccer to rugby as his preferred sport), followed by three years in the RAF. In 1948 he went to Lincoln College, Oxford, reading Modern Greats and gaining an MA (Hons) in 1972. During this period he played for Northampton, the United Services and Oxford winning blues in 1948, 49 and 50 He also appeared for the United Services and the East Midlands.

Lewis fulfilled his ambition to study medicine by being accepted at St. Mary's, qualifying LMSSA and MB.BS in 1958. It was this ambition that earned him the reputation in Northampton of being a bit of a swot.

Cannell was now at his rugby peak, earning his England caps, playing for the Barbarians, London Counties and Middlesex. Domestically he continued with the Northampton club and helped to ensure the St. Mary's supremacy in the Hospital Cup - some of us will recall a cricket match score against Charing Cross. An incisive balanced runner with an imperceptible change of pace who could create openings where there appeared to be none, he is recognised as one of the outstanding players of his generation, and his partnership with Jeff Butterfield as a classic.

Following junior hospital posts at Mary's, George's, Moorfields, Banbury, and Edinburgh, he left the UK for South Africa in 1965. After a period in General Practice he commenced radiological studies in Durban, coming to The Middlesex to obtain the London DMRD in 1970. A year in Bart's in 1973/4 culminated in his passing the FFR. Lewis returned to a teaching hospital consultant post in Durban, but came back to England in 1975 to be Consultant at Stoke Mandeville, where he initiated developments in the radiological service, notably the spinal injuries ultrasound and urodynamic service and the fund raising and commissioning of the CT service. In addition he was primarily responsible for the planning of radiology in the Milton Keynes DGH.

In latter years high standard rugby took its toll and he was bedevilled by traumatised joints, only partially relieved by surgery. He remained irrepressibly cheerful. A bon viveur, a learned, humorous raconteur and a good dinner companion he will be missed by his many friends.

When Lewis first joined The Middlesex one of the chiefs asked a senior registrar, Dr. Audrey Tucker, to look after Dr. Cannell. This she did, and, as his wife, continued to do with love and dedication, until his death from a cardiac complication in March 2003.